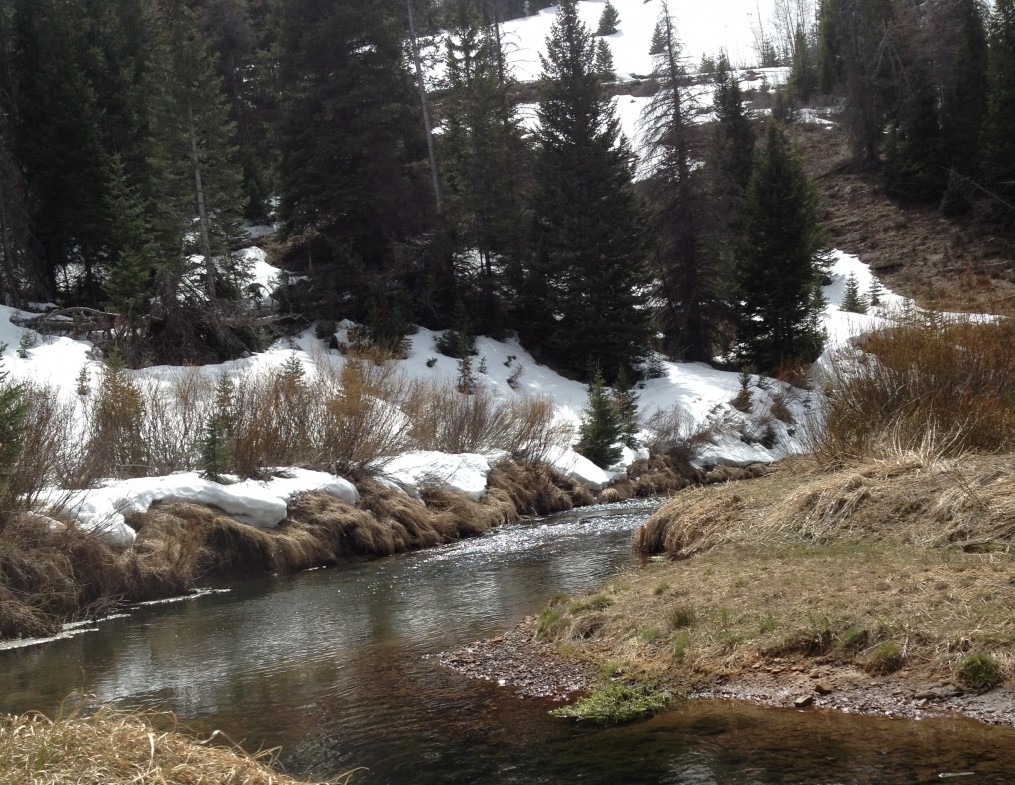 Author’s note: I’d like to thank everybody for their support. Your likes and comments are a source of inspiration.

I leaned against the tailgate, watching the Sun expose the flatlands below, wondering if I’d miss any of it. I’d breezed through Denver in the wee hours, instinctively not wanting to add to the feted and festering flotsam that collects along the Front Range. I was heading into the mountains; away from humidity and sweat; away from those who lean on the brass bull and are defined by profits and stuff; away from those who would happily sell their mother’s soul for a quart of beer and a twenty-rock—they are “the others,” and I wouldn’t miss them. I wouldn’t miss home either. I’d never had one.

I’d attended fifteen different schools in five states before quitting high school to go into the service, so when people asked me where I was from, I’d answer, “Nowhere in particular.” I’d owned property and lived out of my truck, been married and gotten divorced, played the game and dropped out. The only thing that had been a constant for me through it all had been fly fishing.

It was fly fishing for wild trout as much as a desire to put distance between me and the flatlands that drew me to the Inner Mountain West; the final destination of Hemmingway, and the refuge of Wallace Stegner, Edward Abbey, and Harry Middleton—interminable drifters and seekers who’d found something out here in this bigness that reminds you to be small.

Hemmingway found a shotgun—perhaps his ego wouldn’t compress. Middleton found people living on the fringe of society who cared for him, a beautiful woman, and a blind trout. Stegner and Abbey found purpose in a love of land that sucked them into causes and battles. Stegner fought the damn dam builders and retreated to Vermont to die; Abbey stayed and continued the fight until his death; and Middleton took his memories back to Alabama, county garbage truck no. 2, depression, and a brain hemorrhage. The common denominator then was death, and I wondered if that’s what I would find among these wind scoured peeks. I’d come to catch wild trout in stream gouged canyons and hold God in my hand. I found a land in trouble.

I met people able to strip mountains of their beauty for profit and leave with their hubris intact. I met people who’d lived here all their lives, looking up at the mountains every day, never bothering to go up there. Those that did go left a trail of beer cans, worm containers, and dirty diapers, striding through the land with a total disregard for anything but self. I couldn’t go deep enough into the high country to escape corporate America, illegal gillnet operations, and the glint of empty beer cans. The federal government claimed some of the high ground, creating national forests, parks, and monuments in an effort to preserve as much of the land as they could. But the flatland politicians don’t like that, and they’re making moves to declare that land state land; their corporate buddies will pay big money to develop, drill, dig, and cut their way to greater wealth. The scars of scraping, digging, and over-grazing mark their trails, and blue exhaust hangs in the high-country canyons like fat on a bishop. They are embryonic gods, put here to “prosper on the land,” destined to rule over their own planets and galaxies.

It took a while for my obsession with fly fishing to become more about the places it took me than about catching fish, and it wasn’t until frantic bumbling turned to quiet competence, until manic passion gave way to quiet reflection that I started looking around. The passage of time etched into the khaki sandstone cliffs highlighted my puny life span, leaving me with a profound sense of my nothingness. The power that formed these mountains was hard to comprehend. These sweeping valleys surrounded by snow covered peaks outlined against a hard-blue sky made it impossible for me to think that I mattered, and I doubted if any of society’s petty doings mattered.

I’d come west from the east, where impressive things are built, brick by brick, by people. But no earthmover, no economically enslaved civilization could build these mountains. The cliff faces told of their violent birth, the boulders in the valleys, of their constant change. No, people could not build mountains, but they could destroy them.

All sides are convinced of the moral superiority of their respective positions, believing the other side to be either moon bats, incapable of reasonable discourse, or robber barons, bent on the destruction of nature in the name of godless capitalism. There’s some truth to both viewpoints, but neither side will own those inconvenient truths—half-truth is more easily embraced, as whole truth is always messy. There are no all-satisfying solutions to any of this. It’s a cluster.

The biggest fights in the West are over water. There’s a saying out here: “Whiskey’s for drinkin’, water’s for fightin’ over.” It’s possible to be beaten or even murdered over water—it is the Wild West, after all—and everybody has a dog in the fight; old recluse fly fishermen included. The steely-eyed, quietly-moral westerner is a myth; a man’s word means the same thing here as it does anywhere else—absolutely nothing. So instead of honorably tradin’ lead, these battles are mostly fought with money and lawyers; the lawyers being the big winners. The losers?—wildlife, forests, and people. I realized the hopelessness of it all when I attended a function put on by a local conservation group.

I looked around the room and it was obvious these well intentioned geriatric hippies didn’t have the money to fight protracted legal battles, and short of going to the state capitol and setting their ponytails and beards on fire, they were unlikely to garner much attention to their cause. The guy we’d come to hear speak wasn’t Edward Abbey, and as far as ground forces, well, there were no Haydukes in the crowd. The big money concerns are consolidated, the environmentalists divided, and ranchers in the West have never been able to agree on the color of scat. But they aren’t the mountain’s only enemies; natural enemies can be just as destructive, and the forest service’s trial-and-error methods of management—mostly errors—leave the mountains ripe for devastation that takes a generation to recover from.

There’s nothing sadder than hillsides covered in the dead brown and quiet gray of beetle-killed pines. Add drought and you have a forest of powdery tinder primed for storms that bring little rain but plenty of lightning. Fires rage for weeks, leaving burn-scared canyons, ash covered streams and bristling forests of blackened sticks. After a fire, the runoff sends walls of rocks, mud, and debris into the valleys, blowing out roads, choking off creeks, killing fish. They bring in heavy equipment to repair roads and open up streams, creating more problems. Seeing a D-9 Catt sitting in the middle of what was once a blue-ribbon trout fishery, leaking hydraulic fluid and oil is—well.

I’d come to the mountains to fish for wild trout and found refuge and a sense of purpose. I found quixotic battles, passed down by fallen legends, waiting to be fought. And I found indescribable beauty. For the first time in my life I noticed the wonderment around me. I caught myself looking up a lot, watching the wind whip ribbons of ice crystals from snow covered peaks, and when that arctic air washed into the high valleys, I felt a cleansing—down deep. I understood why ancient people held mountains sacred. I would never have figured that out on the hot, muggy flatlands, and I knew I’d done good by coming here. I also knew I could no longer stand on a mountain, looking down, feeling smug. I now had an answer for the question, “Where ya from?” I wasn’t from “nowhere in particular” anymore. And it no longer mattered why I’d come.

© Robert Robinson 2015 Unauthorized use and/or duplication of this material without express and written permission from this blog’s author and/or owner is strictly prohibited. Excerpts and links may be used, provided that full and clear credit is given to Robert Robinson and with appropriate and specific direction to the original content.

Follow flyfishingthehighcountry on WordPress.com
Join 706 other followers
“I fish, not because I regard fishing as being so terribly important, but because I suspect that so many of the other concerns of men are equally unimportant and not nearly so much fun.” ― Robert Traver